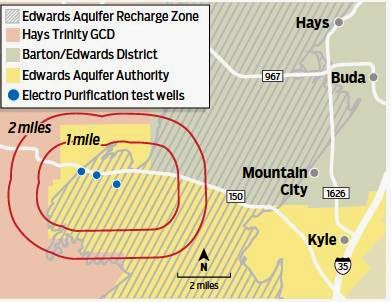 Niederwald-area utility would be barred from using eminent domain.

To report this story, the American-Statesman submitted Texas Public Information Act requests for copies of all written communications between the Goforth Special Utility District and many players in the Electro Purification plan.
Goforth provided some emails but is withholding many others, including all those related to a 13-mile pipeline critical to the project’s future. Goforth is asking the state attorney general’s office to allow it to seal communications that fall under exceptions to the disclosure law for attorney-client privilege and potential real estate transactions. The office has until April 15 to make a ruling.

As outrage has mounted this year over the Electro Purification well field being built in Hays County, officials from Buda and the planned Anthem subdivision — two customers of the project — have dutifully showed up to town halls and round tables, subjecting themselves to the jeers of their neighbors.

But missing from every public meeting has been the most critical player in making the project a reality: the Goforth Special Utility District, a Niederwald-area water provider that has the largest contract with Houston-based Electro Purification’s venture in Hays County.
Goforth is now front and center because of a bill filed last week by state Rep. Jason Isaac, R-Dripping Springs, that is designed to stop the project in its tracks. The measure would prohibit Goforth from using eminent domain outside of its service area, preventing the utility from acquiring the right of way needed to build a 13-mile pipeline connecting the Wimberleyarea well field to its customers along the Interstate 35 corridor.

The American-Statesman in January requested copies of all written communications between Goforth and Electro Purification through the Texas Public Information Act. The utility provided a trove of emails but is withholding many others, including all emails related to the pipeline.
Although incomplete, the emails provided from December 2012 to January 2014 offer a window into the planning that went on for years before the project became the subject of outrage in late 2014. The emails show that water quality was a chief concern for the utility in the early stages of the negotiations and that the company sought lower standards for the water. They also show that Electro Purification was eager to move the project along, urging the district at one point to move more quickly.

Electro Purification manager Bart Fletcher wrote in March 2014 that “we need to move forward as soon as possible on the pipeline. We would like the board to approve the delivery of water to Goforth the summer of 2015 tonight, so we can get started on the project.”
The timing could become a critical issue as Isaac and the Trinity Edwards Spring Protection Association — a nonprofit formed by residents near the wells, which plans to sue the company — race against the clock to stop the project before it begins delivering water. Doing so, many believe, could make it harder for Electro Purification to claim it should be grandfathered into any changes in law that would govern the project, which has found a loophole in Texas law that will allow the company to pump from a distressed water source with little oversight.
The wells are being drilled into the Trinity Aquifer but they are in the territory of the Edwards Aquifer Authority. As a result, the authority cannot regulate the project because it isn’t using Edwards water, and the nearby Hays Trinity Groundwater Conservation District has no jurisdiction because the wells are outside its territory.

Without district oversight, the project is subject only to Texas’ century-old “rule of capture,” which gives property owners nearly unfettered rights to pump water from beneath their land
— even at the expense of their neighbors.


Electro Purification has contracted to deliver up to 5.3 million gallons per day out of its well field off of RM 3237 between Wimberley and Kyle, alarming the hundreds of residents in the area who rely on private wells. Goforth’s reservation for 3 million gallons per day is the largest.
The Trinity Aquifer is generally considered to have poorer-quality water than the Edwards, which is where Goforth’s water supplies currently come from. In January 2013, Electro Purification sent Goforth a draft version of the contract that included suggested changes, including one that deleted a clause that said the water “will meet any more stringent standards reasonably required by the Buyer to ensure acceptable total dissolved solids (TDS), salinity, taste, and odor.”

A month earlier, Fletcher sent Goforth an email saying that the company wanted to use the Texas Commission on Environmental Quality’s water standards, not the more stringent rules set by the federal Environmental Protection Agency. A hydrogeologist at Electro Purification, Fletcher wrote, “advises us that very few water systems in Texas meet EPA standards but meet TCEQ standards.” The executed contract uses the TCEQ standards.

During a February 2014 exchange that set up a meeting for the Goforth board of directors to taste water from Electro Purification’s test wells, Mario Tobias, the utility’s general manager, warned that they might not want to drink untreated water. Leonard Dougal, Go-forth’s general counsel, then volunteered to do so himself: “I will drink it. If I survive, I expect the directors will feel OK about it. So, let’s proceed.”

In the end, the directors tasted the water and were satisfied. Tobias then wrote to the company asking if it was OK to pour out the leftover water. Tim Throckmorton, an Electro Purification manager, said the company did not need the water but joked about disposing it: “Sure put on the plants, that is expensive water!”

In a written statement Monday, Throckmorton said that his company’s relationship with Go-forth began five years ago, when the utility was searching for new ways to provide water to its fast-growing customer base.

“They understood they are required to provide water in their service area, thus they were looking for alternatives to providing for their customers,” Throckmorton said. “Electro Purification and Goforth entered into a contractual agreement in order to meet part of their long-term water needs.”
Although the Statesman requested all communications since January 2008, the earliest email provided by Go-forth was from December 2012. Goforth has asked Attorney General Ken Paxton to allow it to withhold communications requested by the newspaper that Dougal believes are exempted from the Public Information Act, including those covered by attorney-client privilege and discussions on potential real estate transactions or eminent-domain takings for the 13-mile pipeline.
Property owners along FM 150, a potential route for the pipeline, have received letters from the Lockwood, Andrews & Newnam engineering firm, which Goforth has hired to help it acquire right of way for the pipeline.

The firm is attempting to negotiate for the easements, but some owners who oppose Electro Purification have vowed not to give up their land. The utility has not yet authorized the use of eminent domain, Dougal said, but it may do so at a future meeting.

The next meeting is March 25. Goforth canceled its February meeting after throngs of angry Wimberley-area residents began showing up to meetings of every governmental body with a connection to the project. Organizers of Electro Purification’s opponents say they are planning to attend the March 25 meeting, which had been scheduled for Wednesday.

But a message on the Goforth website suggests they might not all be able to get in: “There is limited seating (30 seats available) in board room.”